New version of the OS ? Soon or not ?

I don't have a detented encoder version of the Solaris but am very eager to finally get an OS where midi clocking and the sustain pedal work properly. Hopefully, the version for us will be out shortly. I hope this also signals the start of more regular releases.
Top

inaheartbeat wrote:I don't have a detented encoder version of the Solaris but am very eager to finally get an OS where midi clocking and the sustain pedal work properly. Hopefully, the version for us will be out shortly. I hope this also signals the start of more regular releases.

We have something that is very near ready to release, and will work with both detented and non-detented front panels. However, the MIDI clock when External fix is still a little bit of work to go - maybe 2 weeks.

I did notice that if I set the Solaris on Internal clock, and just make the BPM the same on the Solaris and another synth, they really stay remarkably "in sync" just playing like that, but of course, when you vary one, you have to manually change the other as well

I'd also like to know how many owners are using a FATAR/Studiologic foot switch for Sustain? These seem to be particularly problematic, as we focus in on getting the last little sustain pedal issues solved.
I have both a Yamaha FC4A and Studiologic dual VFP2, and have great results with the Yamaha, and not so great with the Studiologic (which is Fatar). It seems the FATAR pedals do not put out a high enough value when you press on them, but only when you release them, and then it drops quickly again, so we see a brief sustain (Hold) LED during the release phase of the pedal, meaning it is on then off during the release phase of the pedal.

I use a ROLAND pedal and I can also try my M-AUDIO.
Top

I have a Yamaha (model unsure) Pol+, Ensoniq SW-5 Pol-, and a M-Gear (unsure of the model) Pol-. These are all the basic make / break contact variety with no electronics.

I did some quick testing in OS 1.2.6 (you may already have this but in case you don't):

All of the pedals work fine in edit mode.

In Preset mode - the Pol+ pedal causes lags in note playing but does sustain notes correctly.

In Preset mode - the Pol- pedals both do not sustain. The hold light flashes as you press or release the pedal, but does not stay on.

I'll send you the latest beta to test - the lag is fixed; I'm just looking into the various pedals out there now.
Top

While we've been having some owners beta test the various updates, we have discovered that it's quite possible your global INIT file has been slightly corrupted. The result is that Legato:Reassign gets broken (using monophonic Play Mode). When we release the next OS update, I'll also post a 'clean' global INIT file (called 'glo.ini' in your Factory folder) for use by all owners.
Top

I have both an M-Audio and Kurzweil sustain pedal here. I haven't encountered any issues with either in the current release, but it is somewhat tiresome to have to turn on sustain for each patch. Is there any planned change to this or a workaround?
Top

I've been using a Boss FS-6 as sustain and latch.

I have both an M-Audio and Kurzweil sustain pedal here. I haven't encountered any issues with either in the current release, but it is somewhat tiresome to have to turn on sustain for each patch. Is there any planned change to this or a workaround?

You have an older set of the factory Programs, I think. Please download v4.0 Factory Presets. I went through many of them and programmed Sustain to be assigned to SusPed1.

You can find these in the Data Files section: viewtopic.php?f=8&t=16380
Top

I have been using an old Moog fs1 which has worked fine.
Top

pinmusica wrote:I'm not that keen on paying for updates, at least until some bugs are polished away (I think until then we all deserve; just my opinion).

Beyond that, I guess I would pay for an update that adds an FM (Yamaha Phase modulation) oscillator with 4 or 3 ops feedback and simple AR Envelopes within (bearing in mind, it seems to be not posible to implement between the existing oscillators, because of technical structure of its programming design or something else; not sure, though), or improves its Linear FM behaviour, as the user cLoudForest pointed out:
viewtopic.php?f=21&t=16350&p=21462&hili ... +fm#p21462

(Besides all that, I really think Solaris is the best Poly synthesizer so far of all time; at least for me // just longging for that FM bit I love on my most loved synthesizer....)

The next thing on my list back when we first released the Solaris was an Osc Type for the Yamaha FM (phase mod as you point out). The decision to delay it was because things had reached a point where we needed to go into production and start having a product to sell. Unfortunately, following the initial year or two after release to the market, the DSP engineer left to work in a more stable business for a medical instruments company (at the strong urging of his wife and wife’s family members). Since then, I've not had a reliable DSP designer who could code this additional module. HOWEVER...at the most recent NAMM show, I did make contact with a very likely candidate, so I hope we can get it done by the end of the year!

Thanks for the answer + the news (the new DSP designer)

+ hope everything goes well + you're able to squeeze that Phase Mod Osc into the upcoming new OS.

Here's an update on the sustain pedal issues. Thanks to those who posted their pedal brand/type.

I received a new OS update today, and it seems the issue is solved! My Fatar pedal is working perfectly in all cases, as are the other 2 pedals I have (Yamaha FC4A and SCI switch). I will proceed to check it with some of the other brands, but I do believe we have resolved this issue, finally!

Next up is to finish External MIDI clock sync, which is in a very early functional state. State tuned!!
Top

jfinstad wrote:I've been using a Boss FS-6 as sustain and latch.

I use the same dual design, love it.
Expression is FC7 or Roland EV-5 or Behringer w/ Ashby Adapter...

New OS?
Cool, but I've been fine without it. 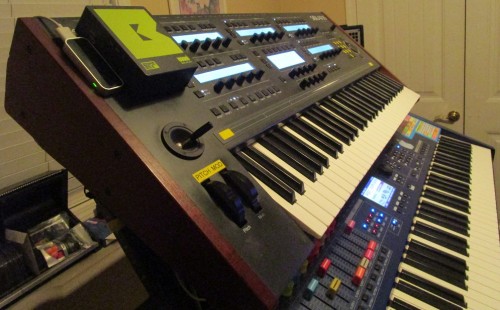 I don’t if I need to post this here, but I can definitely state now that the new version is really soon...