For those who do not pay, charge for the "upgrade" a modest amount. This will determine who wants the upgrade and it will put money back into the process so the rest of us can benefit. Not everyone can pay upfront. But some can pay after its all done. I'm sure some of the things like FM synthesis (especially being able to clone some of the Synergy or Synclavier type voices) would be superb!
Solaris, Jomox Sunsyn,Modcan, Prophet-T8, Rhodes-Chroma, Pacarana,CS-80, Andromeda,M3,Nord-G2X,DK-Synergy
Top

my perception
(after having published more than 180 presets)

+50€
-display of joystick coordinate x y in real time
i think it is cheap to do,
the help provides by this one can save lot of search time.
i think it can be done for mod wheel pitch wheel and ruban too.
option : record joystick moves to get an egxy curve

+50€
-reverb : i understand those who don't want one
but everyone don't have a reverb unit,
and it is potentiel artistic expression in a preset
i think a freeverb implementation is not over complicated
( in 96khz 32 bits, wouldn't it be lushy ?

)
i often feel to frustrated to only use delay.

+>100€
-multi timbral : i think it will cost a lot ...
and you can already do this with keymap
maybe there is something more clever to do
with arp<->keymap first
and then multiplying the arp (like having 4 independant)
and last provide some option for arp+seq cumulation modes
(mainly with seq as a gate) in order to preserve polyphony

Any updates on this? Have 200 dinero currently burning a hole in my pocket

After thinking about it I am ready for 500€ for a multi-timbral update. If I can have 2 Solaris, it is not expensive.
I don't know how many others users can give something, how many we can give and how many money the update need ?
I think that time goes by ... and if we do nothing, the goods chances to have something decrease.
If I understand well we had lost the dsp developer ? But maybe we can go to meet another one with the global money offer by the voluntary users ?

Sorry maybe I am far of the reality of this update work ... I just try to understand and I dream with a multi-timbral Solaris.
Top

We have done some preliminary exploration into multimode capability. Right now I can verify that we are able to load a different preset into each DSP. Next is designing a new object structure that contains all of the required parameters for a useful MultiMode. It will be a lot of work.
Top

Since this thread started, I had been thinking a lot.

Before I bought my Solaris, I was looking at Prophet 12 and OB-6. Those two had possibility to give me hands on experience and sounds I needed. OB-6 in the front and P12 in the background. I had to chose one at the end of 2016 and maybe afford second right about now. Space and money were my main concerns. Then I found Solaris and it fit perfectly, but it was over my budget and in order to get it in one go ASAP, I had to stretch my financial possibilities. I ordered last or one before last unit from mentioned batch, begging John to hold one for me. Since it was one synth for a long time and only big "analog", and I don't go well with overdubbing, I was hoping for multitimbrality to come. I like to record and modulate everything in one go. I might automate via MIDI, to free my hands, but not overdub.

I'm looking at this synth as VA, with main purpose to be as close to analog as possible, and assume, when looking at implemented models, this was the design goal. So if this is my main machine, and only "proper poly <<analog>>", let it be the best one.

Furthermore, I am lusting over Jupiter (out of my reach! hence my previous request for this filter type), for its "organic" sound. And am trying to build some patch that sounds like best big Jupiter sounds I have heard. This is my target and my reference point. Everything else can be done with what I have right now: Nord (love it!), Blofeld (hate it!), Sub (love it!), Monologue (don't know yet), smaller stuff... Achieving this with Solaris would be my dream, without going to obtaining and maintaining real one.

So to the point. I am changing my priorities. Therefore, John, if you do some sort of statistical analysis, I might give you new input, as those are my priorities right now:

1) For $100. Some sort of instability for VCO, VCA, EG, LFO (the more, the higher resolution, the better), per patch. I already am using all LFOs and lag processors (S/H at 5 Hz -> lag, which I treat as an RC integrating circuit, giving it large time value -> generous modulation of parameter) toward my goal and don't know what I'm doing wrong, feeling I'm still missing something.

Some time ago I found this quote from Korg's engineer that speaks (quote not engineer) best, what I'm looking for:
"I think it's really telling of the age we live in when you get a knob like "SLOP" on the new Prophet that makes pitch inconsistencies a programmable parameter. On one hand, you think that the level of control is great, but on the other it feels weird to deliberately degrade something that's stable. Especially if you're a young engineer striving to design something to be close as possible to perfection, it can be hard to grasp. The best lesson about this came from Mieda – my hero at Korg. When he looked at my first synth schematic, he told me, “Takahashi-kun, your circuits are functional, but they are not musical. Musical instruments do not need perfect waveforms and correct operating points. You need to use the transistor for what it is. As long as it sounds good, it’s OK.”
My example would be looking at string instruments. When I was in university, I had to calculate string spectrum in frequency domain, when guitar string was plucked. When simulating and hearing this from my sound card this was nothing like real instrument. It's like listening something obviously pretending. I know, that goog programmers can overcome this, but I am not good programmer and slop would be very helpful for me.

2) For $200. Roland filter from Jupiter 8, 4 or 6, like stated before, but either non sacrificing polyphony or with ability to switch it off and return to 10 voices. If sacrifice was permanent, I could live with 8 polyphony, but 6 is to little.

3) For $200. Wavetable interpolation. I did some WT sweeps and it seemed fine, but when I tried to do it slower and in narrower range, I started to hear stepping. This thing here excludes some sounds I'm after.

3b) Another $200. To the point three I would add adding of own wavetables. That would be completely next level for this synth! I would stop lusting over Quantum!

5) For $100. Microtuning. Recently found ultimate solution for my problem of imagining sounds that are not distributed like typical white and black keys do. Mind blown!

7) Now I'm guessing, since I haven't been near original synths, but there is something missing in lower end of my Solaris. Is it DAC or are they models - I can't tell. I feel like there is too little of earthquake in my headphones while Sub, going thru same mixer, is ripping my eardrums. If it's the latter, I am voting for some agressive set of models (VCO, VCF, VCA from Jupiter?) or correcting old ones. I'm not sound engineer so I might be wrong all the way and solution lays in mastering...

For $50-$100. Proper reverb. One model is enough if it stays in spacey realm. If it would be something based on true physical models (like impulse response researched), then I am willing to pay $100 total for some nice and subtle (compared to spacey verbs) room or hall AND spacey reverb (like Cloud from Big Sky).

9) I no longer vote for multitimbrality, but if you start collecting for this feature, I will chip in.

We have a new colleague!

I am very excited to announce a new addition to the Solaris development team -Željko Hrastovčak, better known as ‘HrastProgrammer’, has agreed to work on the Solaris DSP code! 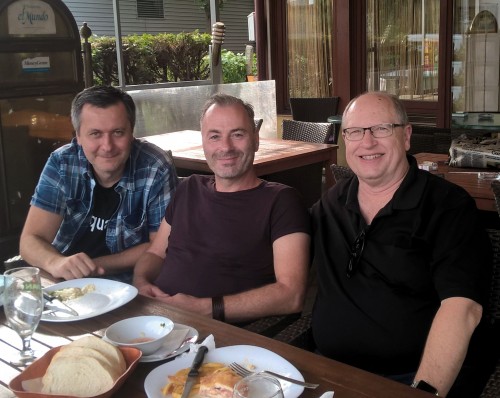 (Left to right - Hrast, Holger Drenkelfort of Sonic Core, and me)

He has read the information posted in this topic regarding the Developer Fund, and once he has had a chance to review the Solaris code, we will discuss what things can be done. Once we have a clear idea of what functions can be added, I will post a proposal here listing the options that will be under consideration.

Please welcome Hrast to the Solaris community - we are extremely fortunate to have him involved, as I know you will all agree.

Check out the large library of music he has done over the years - multiple albums’ worth of wonderful compositions by this prolific creative genius, using his very own synthesizer software, Tranzistow! https://hrastprogrammer.bandcamp.com/al ... -2008-2018

really good news !!!!!!
Welcome Welcome !!
any idea of when would subscriptions begin ?
Top

At the moment, Hrast is investigating some of the initial items on the Request List. Once we determine just what we can offer in an initial upgrade pack, we can figure out an offer.
Top

Hi John,
Please count me in to fund this. I can do $500 or more. Please let me know the logistics of the payment.
I may be able to contribute more funds depends on my situation. If things go well for me, I'll reach out to you directly to see if we can do much more than just an OS update.
Best,
Christian
Top

chrisratajczak wrote: ↑
Wed Dec 19, 2018 6:40 pm
Hi John,
Please count me in to fund this. I can do $500 or more. Please let me know the logistics of the payment.
I may be able to contribute more funds depends on my situation. If things go well for me, I'll reach out to you directly to see if we can do much more than just an OS update.
Best,
Christian

Thank you for your offer and comments. I will have something solid to offer in the first quarter of 2019, so please stand by.
Top

John Bowen wrote: ↑
Wed Nov 22, 2017 11:14 pm
Anyway, I need to find out how many of you would be willing to pre-pay DSP code development work, and exactly what features you would expect.

Sorry for being late to the party (due to many things I have not had time to attend to the Solaris Forum for quite a while). Please count me in!

Hopefully this is a fairly realistic list that does not vary exceptionally from other requests.
Top
Post Reply
137 posts